The brick may be the best exterior cladding material ever designed. After all, what other cladding offers a 100-year warranty, is recyclable, requires low maintenance, is made from common green materials, provides excellent fire protection, and more?

Like all other building material, bricks will perform as intended only if installed as required by industry standards. In home exterior inspections, I have found a  number of masonry installation defects on every house I’ve inspected. Here are the most common ones.

Prior to placement in a wall, bricks should never be stored in direct contact with the ground. They should always be stacked on planks. However, I have rarely seen this done properly. OSHA also has its own list of requirements regarding the storage and stacking of bricks that apply to residential construction.

For a cavity wall to function properly, such as those found in brick veneer construction, water that ponds on the underlying weather-resistant barrier must be able to evaporate and drain through weep holes to the exterior of the building. If the weep holes do not function properly, water ponding in the cavity can infiltrate to the home’s interior. For proper drainage, cavity walls must be constructed to keep the cavity clear of mortar droppings, detailed correctly, and prevent weep-hole blockage.

There are several ways to satisfy the weep hole requirement in the IRC, such as wicks, weep vents, etc. Code-compliant weep holes in Texas typically consist of omitting the head joint between the bricks at 33″ intervals above any flashing. This includes the sill flashing above all lintel-supported openings, including windows, doors, knee walls, etc. Even when these openings are provided, sloppy workmanship may result in the blockage of weep holes when mortar is dropped into the wall cavity during the installation process. One method to prevent this is the installation of products that help keep the weep holes clear.

In new home exterior inspections, it is easy to observe that wall and brick installation variations (as well as the installation of gas piping, plumbing, etc.) in the air space do not always provide the 1″ clearance as required by the IRC. This is considered a defect.

In both existing and new home exterior inspections, the addition of weep holes is strongly recommended. The IRC requires only a 3/16″ hole to be drilled in all locations requiring weep holes, thus deflating the argument that weep holes are just too difficult to add post-construction.

Homeowners often attempt to prevent mice and insects from entering weep holes by stuffing them with steel wool. This is a bad idea. The steel wool rusts and serves to fully block the weep-hole openings. Better materials are available that serve this purpose, such as copper mesh, stainless steel wool, bronze wool, plastic substitutes, and retro-fitted screen devices.

With one exception, the 1″ air space between the back of the brick veneer and the face of the sheathing must remain clear in order to function as a ventilation cavity. Mortar dropped by masons into the cavity during the brick installation process can limit the air flow in this air space. Plus, connecting the brick veneer to the sheathing creates a thermal bridge, which is not allowed by the IECC. Some sheathing manufacturers strictly prohibit bridging the gap between their sheathing and the brick veneer, as this would void their warranties. The air space is almost never ascertainable on exiting construction, so this defect is usually observable only in new home construction.

Brick veneer undergoes long-term expansion over the life of the brick, though most of this expansion takes place during the first few years. It is also subject to short-term expansion and contraction due to exposure to sunlight. Most bricks are manufactured so that, given an annual temperature differential of 100° F., an expansion of approximately 5/8″ will be experienced in a 100′ long wall.

The use of wall ties dates back to the 1850s. The standard ties used today consist of corrugated galvanized steel strips approximately 6-9/16 x 7/8-inch. One end of the tie is nailed to the sheathing over framing (which must be attached to a stud), and the other is extended into the mortar joint.

Typically, wall ties perform three to four primary functions between the brick veneer and its backing:

Brick ties are not visible during inspections on existing homes, but defects in them or their installation can often be ascertained through close observation. Loose walls that move when pushed by hand are indicative of inadequate, missing, or failed (rusted-out) ties. It is possible to repair such walls in some situations using devices such as the Simpson Heli-Tie®.

On home exterior inspections, it is important to note the spacing, fastening and alignment of the ties to ensure their proper performance.

All horizontal brick surfaces must be sloped in order to promote drainage. Window sills are the major culprit with houses. The primary function of a sill is to channel water away from the building. The sill cannot be level or sloped back toward the building if it is to perform as intended. Plus, the 15-degree slope requirement of the Brick Industry Association’s Technical Note 36 is rarely met.

Common mortar types for brick veneer include Types N, S, and M. Type N is almost exclusively used for above-grade walls, unless Type S is specified. Type M is used for below-grade work, such as for retaining walls. Mortar failure is often due to the use of the wrong type of mortar for the application.

Many styles of tooled joints are used in brick veneer mortar. The three most common are the V-joint, concave, and weather joints. These tend to provide the most weather resistance over time. Other types of joints are often problematic.

In home exterior inspections, this category of defects is the most common and egregious.  Flashing is the material that makes the transition between the brick veneer and dissimilar types of cladding present on the building exterior, such as siding, trim, other types of masonry, roof coverings, etc.

With many production builders’ preference of using sub-contractors, the responsibility for the installation of flashing has fallen into a grey area. Many brick masons do not think it is their job, and neither do many exterior trim carpenters or roofers. This situation is further exacerbated by the desire for speed of construction.  And the old-time method of brazing or soldering the joints in metal flashing is out of fashion due to a lack of skilled workers. Thus, the flashing usually does not get installed properly, if it gets installed at all.

Joints in flashings constructed today commonly rely on sealants in order to prevent moisture intrusion. While flashings are durable materials that can last for decades, sealants have short life spans and must be renewed at regular intervals and at great expense.

In home exterior inspections, another issue is the common use of ICC-approved, self-adhered flashings behind brick veneer at window and door headers and other wall openings. This practice has effectively done away with the IRC-required through-wall flashings.

The top flashing issues I encounter are:

Missing or non-continuous sill flashing at the brick ledge can lead to many issues, such as moisture intrusion, and those ubiquitous cracks at the outside corners of slab-on-ground foundations known as truncated cone fractures.

The lack of end dams in all horizontal flashings can lead to lateral movement of water into the walls.

Most home exterior inspections have observed water stains on framing in attics adjacent to chimneys. Poor flashing is almost always the reason.

Lintels are L-shaped steel members that support openings in brick veneer walls. These are required over all openings where the brick veneer would otherwise be acting as a beam, which it cannot do.

The major problems typically observed include:

Lintels are required above even the smallest openings in brick veneer. Small windows, pet doors, gable vents, etc., are locations where they are typically missing. 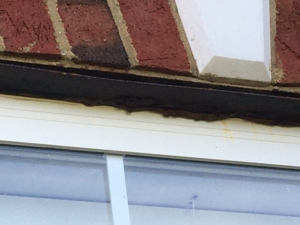 Lintel with lack of paint

openings at garages, especially where there is a second story of brick veneer being supported above.

All lintels are required to be supported a minimum of 4″ at each end, per the IRC.

Lintels are shipped from the factory with a red primer intended to prevent corrosion during shipping, handling and installation. This coating is not sufficient to withstand the elements once the lintel is installed in a brick wall because uncoated metal rusts. Rusting metal exfoliates, thus expanding and opening mortar joints. It’s typical in home exterior inspections to see that a painter has just blown a coat of latex paint on the rusted lintel without the proper preparation or primer.

Spalling is the shedding or sloughing away of the outer surface of brick due to water absorption and exposure to freeze-thaw cycles. 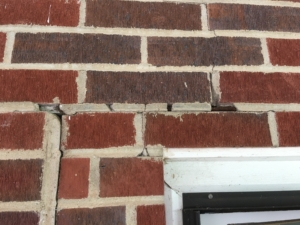 Spalling on Brick Veneer. It can also be due to mechanical defects, such as use of incorrect mortar type, sandblasting, improper cleaning, or the deterioration of the internal anchoring system.

In home exterior inspections, minor spalling is mostly a cosmetic issue. Replacement of a few bricks is an option if matching bricks are available. If not, repair with fast-setting repair mortar and a color-matching stain may do the trick. For widespread spalling, replacement of the brick veneer is the best option.

In home exterior inspections, efflorescence is a white, powdery deposit of water-soluble salts left on the surface of brick after the water evaporates. If not caused by underlying moisture intrusion issues, simple cleaning is usually sufficient to deal with this.

In home exterior inspections, exterior brick veneer walls should, ideally, not be painted. If painting is somehow required or desired, the type of paint used is critical. If it does not have the proper permeability rating, it will serve to trap moisture in the bricks, as well as the air space behind the bricks.

In home exterior inspections, furthermore, it is somewhat illogical to paint bricks. Once even the proper paint is applied, one must then repaint the bricks on a regular basis, thus defeating the low to no maintenance advantage of using bricks in the first place.  But as it is a matter of aesthetics, proper maintenance, including repainting as needed, will help the brickwork last longer and preserve their visual appeal.

Repairing brick veneer takes more skill than laying it new. Skilled masons are in short supply. Thus, most brick repairs that I see are substandard. In home exterior inspections, from tuck-pointing to repairing distress cracks, and replacing single broken bricks, the lack of craftsmanship is often apparent.

When done by an amateur, tuck-pointing or re-pointing of mortar joints can result in water intrusion at the poorly-tooled joints. Brick crack repairs, such as following foundation repair attempts, should ideally be accompanied by through-wall reinforcement of the veneer on both sides of the cracks using a product like Simpson’s Heli-Tie®.  Single bricks are often hard to replace because matching bricks cannot be found. In almost all cases, attempts to match new mortar to old are unsuccessful due to the shortage of skilled masons.

In home exterior inspections, there are some valid reasons and some approved methods for the cleaning of the surface of brick veneer. Most of them, however, are not adhered to in practice. home exterior inspections, the most common defects I see are the improper use of power washers, and improper use of acid washes. If performed by the unskilled, both methods of cleaning can result in the weakening or complete removal of the hardened outer brick surface produced by the original firing. The consequences can be soft bricks that are incapable of withstanding moisture intrusion and are subject to damage through spalling.

Cheaper substitutes for brick veneer are always popping up so that unscrupulous builders can eek out another penny for each house they build. One that is already causing problems is commonly referred to as stick-on brick, properly known as adhered masonry veneer.  Another is concrete bricks. 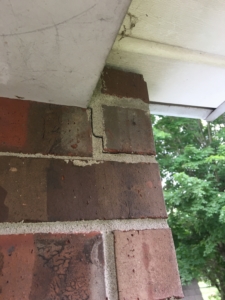 Facts And Trivia About Brick Performance