When inspecting brick veneer, one thing you must understand is that brick veneer is a rigid, brittle material. It simply cannot stretch to any  degree without cracking to relieve strain and stress. With this in mind, all houses settle. Most often, cracks in brick veneer are not a structural concern, only a cosmetic concern. Brick veneer does not support the roof. It does not brace the home from wind; does not do anything structurally. Brick veneer is freestanding, attractive exterior siding that works great as long as ties don’t rust out, water doesn’t leak down behind the brick facade, the brick wall has weep holes at the base that allow moisture to escape, there is sufficient clearance between the bottom of the brick and the ground to keep moisture from wicking upwards, and the brick is rated for exterior use. During a home inspection, if your home inspector sees exterior brick veneer cracks match up with interior dry wall cracks on the other side, that is when homeowners, sellers, and/or buyers should be concerned.

Horizontal cracks are caused by movements in the foundation and deterioration of building materials affecting the walls. Most often appearing on older houses as the building materials tend to lose their stretch throughout the years. 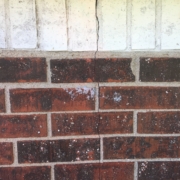 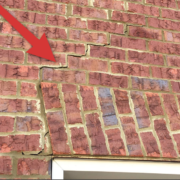 Soil excavation is done before the construction of the foundation of a new home. With time the ground settles and the foundation of the house may  move a little. This movement can cause small vertical cracks, most often they are not a problem. When inspecting brick veneer, the different types of soil houses are built upon can create various degrees of movement, from slight to drastic. Clay expands when moist and cracks and shrinks when dry.

Other means of soil movement are earthquakes, floods, and hurricanes , which can damage the foundation of a home significantly.

Moisture in the Soil

When inspecting brick veneer, the majority of cracks are caused by moisture in the soil at the foundation. Moisture at foundation can be due to vegetation, storm water overflows, blocked gutters, and surface water flowing back towards the foundation. Trees and shrubs placed too close to a house is the most common cause of settlement as the vegetation will affect the moisture levels of the soil thus creating movement and rotation of footings. Also important, always make sure lawn and garden sprinklers are pointed away from your home and foundation.

After a house is around ten years old, the steel lintels above windows, doors, and garage openings begin to rust. When steel rusts, it initially increases in volume. In effect, the rusting lintels push the brick veneer apart above and beside the lintel.

When inspecting brick veneer, if the house is near a construction site, this can affect brick veneer walls. The vibration from the regular use of heavy machines, excavation, and digging may cause your brick walls to crack.

How to Prevent Brick Veneer Cracks

First and foremost, make sure all water sheds away from the home’s foundation. A home inspection should determine if gutters are properly sloped towards downspouts, not pulling away from fascia boards, and cleared of leaves and debris. Make sure all downspouts are attached, and drain at least 6 feet from the foundation. Plus, check that your soil is not sloped towards the house. Grade your soil so it slopes down and away from your home, with a slope of at least 1 inch per horizontal foot for at least 6 feet out from the foundation. Another preventive measure, keep all lintels cleaned and painted. 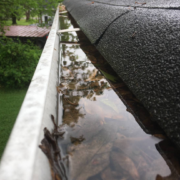 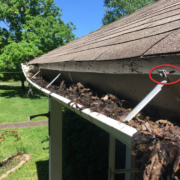 As a home inspector, I recommend getting all brick veneer cracks repaired. They will only get longer over time, and more mortar damage will occur due to moisture getting in existing cracked areas. In the occasions were cracks are caused by foundation failures, obviously, those issues will have to be resolved before brick veneer repairs. If buying or selling a home in Murfreesboro or Middle Tennessee, you need a home inspection to locate and make you aware of the defects in your brick veneer, even if it is just cosmetic.